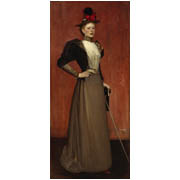 Maggie Hamilton (1867-1952) was a highly skilled embroiderer and painter of flowers and still lifes, the daughter of a Glasgow bobbin manufacturer, and sister of Glasgow Boys painter James Whitelaw Hamilton. In 1883 she was asked by Guthrie’s mother to help her keep house for the Boys at Cockburnspath. Guthrie’s Diploma painting, Midsummer (1892; Royal Scottish Academy, Edinburgh) shows her having tea with her sister and one of the Miss Waltons in the garden of her family home, Thornton Lodge, in Helensburgh. In 1897 she married the architect A. N. Paterson, the younger brother of Glasgow Boy James Paterson. Her embroideries were exhibited at the 1901 International Exhibition in Glasgow and incorporated into the wood panelling of ‘The Long Croft’, the home designed by her husband in Helensburgh. She exhibited at the Royal Scottish Academy from 1889; although denied membership as a woman. She also exhibited annually at the Royal Glasgow Institute of the Fine Arts from 1890. She was an artist member of the Glasgow Society of Lady Artists (later Lady Artists’ Club), which formed in 1882, and was the society’s Vice-President twice, in 1928 and in 1937, as well as on its hanging committee in the 1920s.

This portrait was painted in 1892-93 in Guthrie’s new house at 7 Woodside Place, in the west end of Glasgow, to which a spacious studio had been built behind. Hamilton wears an elegant walking outfit with leg-of-mutton sleeves, embroidered collar, lapels and cuffs, metallic waistband with clasp, smart straw hat with red silk bow and feather plume, and red pointed shoes. Her silhouette is typical of the emancipated Gibson Girl style, with a tailored jacket over a blouse and plain gored skirt, the kind of practical dress that the new working woman would wear, albeit with details that reflect her wealthy and artistic background. Standing full-length against a red curtain, with her right hand on her hip, cane in her left (a traditionally masculine accessory, rather than the more feminine parasol), appears as a fashionable and confident modern woman. The painting pays visual homage to Harmony in Red: Lamplight (1884-86; Hunterian Art Gallery, Glasgow), Whistler’s portrait of his artist wife Beatrix, exhibited at the Society of British Artists in London in 1887-88. Whistler was a significant influence on the Glasgow Boy painters. In 1891 Guthrie had signed his name to a petition urging the Corporation of Glasgow to buy Whistler’s Arrangement in Grey and Black, No. 2: Portrait of Thomas Carlyle for the city.