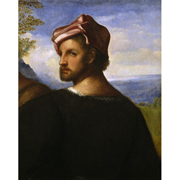 Head of a Man

This painting once formed an integral part of one of the most important works in Glasgow’s collections, Christ and the Adulteress by Tiziano Vecellio, known as Titian. This male head was detached from the main part of the painting at an unknown date, perhaps because part of the canvas directly underneath it had been damaged in some way. The knee of the man whose head this is, wearing striped hose, can still be seen at the right-hand side of the larger part of the painting. This figure is the only one in the composition as a whole who looks away from the action taking place, and out towards the viewer, leading some to enquire if this could be a self-portrait of the artist. However, there is no independent evidence to justify this possibility. The ‘Head’ is now displayed alongside the larger part of the painting, in the approximate position it would originally have occupied.

This painting, like the larger portion of the work, is important as a rare example of Titian’s early work to be seen outside Italy. It was previously attributed to other Venetian artists, including Giorgione, but almost all experts now agree that it was painted by Titian. It is a key work in Titian scholarship, and much admired by visitors.

This work, as an individual painting, was purchased for the collection at auction in 1971.