painting / Arrangement in Grey and Black, No. 2: Portrait of Thomas Carlyle 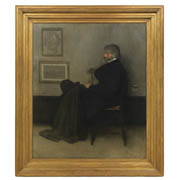 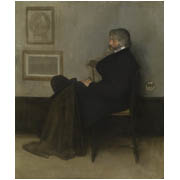 Arrangement in Grey and Black, No. 2: Portrait of Thomas Carlyle

Portrait of the acclaimed Scottish historian, philosopher, writer and social critic Thomas Carlyle (1795-1881). He was persuaded to sit to the American artist and aesthete James McNeill Whistler after seeing Arrangement in Grey and Black, No. 1: Portrait of the Artist’s Mother in Whistler’s London studio. Carlyle lived very close to Whistler at Cheyne Walk in Chelsea. Sittings began almost immediately against the grey walls of 2 Lindsey Row. The painter Hugh Cameron wrote of the sittings: ‘It was the funniest thing I ever saw. There was Carlyle sitting motionless, like a Heathen God or Oriental sage, and Whistler hopping about like a sparrow’.

The poet William Allingham recorded in his diary that Carlyle complained that all the artist’s ‘anxiety seemed to be to get the coat painted to ideal perfection; the face went for little.’ Indeed technical examinations and x-rays reveal much reworking and overpainting around the coat, hands and hat, but the head is very thinly painted. As with his portrait of his mother, Whistler’s chief interest was in creating a harmonious arrangement of colour and form, rather than a sympathetic likeness of the sitter. The framed pictures on the wall and stylized butterfly monogram are all carefully placed to create a balanced composition. Whistler wrote in the ‘Red Rag’ (The World, May 1878): ‘As music is the poetry of sound, so is painting the poetry of sight, and the subject matter has nothing to do with harmony of sound or of colour.’

However, despite this, the portrait was recognised as an excellent likeness. Carlyle’s niece, Mary Carlyle Aitken, wrote: ‘even my uncle is beginning to be impressed with the portrait; he remarked to me when he returned from his last sitting “that he really couldn’t help observing that it was going to be very like him, and that there was a certain massive originality about the whole thing, which was rather impressive!”’ In 1891 Whistler wrote: ‘He is a favourite of mine. I like the gentle sadness about him! – perhaps he was even sensitive – and even misunderstood – who knows!’ According to Carlyle’s biographer James Anthony Froude, at this time Carlyle was still grieving the loss of his wife Jane. He wrote in his journal: ‘More and more dreary, barren, base and ugly seem to me all the aspects of this poor diminishing quack world’.

The painting was considered for purchase by the National Portrait Gallery in 1884 but was rejected. The art critic and cartoonist G. R. Halkett wrote to the Scotsman in 1884 urging the painting to be bought by the Scottish National Portrait Gallery, but Whistler raised the price from 400 to 1,000 guineas, making it impossible for them to raise the money by public subscription. It was exhibited in Glasgow at the 1888 International Exhibition where it was greatly admired by the Glasgow Boys. In 1891 E. A. Walton raised a petition signed by many Glasgow artists, urging the Corporation of Glasgow to buy the painting. A deputation visited London and offered Whistler £800, saying that the figure was less than life-size. ‘But, you know’, Whistler retorted, ‘few men are life-size’. The Corporation agreed to Whistler’s price of 1,000 guineas.

It was the first Whistler painting to be bought by a public collection in the UK and was a bold move. At this time Whistler had fallen out with most of the art establishment in London. The purchase was very appropriate however as Whistler was proud of his Scottish ancestry – his mother was a descendent of the McNeills of Barra. In 1903 he was to receive an honorary degree from the University of Glasgow and in 1936 his sister-in-law Rosalind Birnie Philip gifted his correspondence and studio contents to the University of Glasgow, more