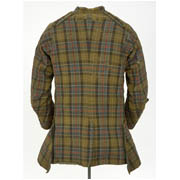 This is one of only a few mid-1700s tartan coats known to have survived, including one said to have belonged to Prince Charles Edward Stuart (1720–88) that is now in the National Museums Scotland, Edinburgh (K.2002.1031). They were all carefully cut out with the pieces arranged on the straight grain so that the tartan set lined up square and symmetrical when sewn together to make the coat. Several, including this example, were cut with hip-length skirts, rather than down to the thigh, to allow them to be worn over a feileadh mór (belted plaid) or trews rather than breeches.

After the defeat of Bonnie Prince Charlie and his Jacobite army at the Battle of Culloden on 16 April 1746 the Hanoverian government brought in a Proscription Act that stated that 'no man or boy, within that part of Great Britain called Scotland [...] will wear or put on the clothes commonly called Highland Clothes (that is to say) the plaid, philibeg, or little kilt, trowse, shoulder belts, or any part whatsoever of what peculiarly belongs to the highland garb; and that no tartan, or party-coloured plaid or stuff shall be used for great coats, or for upper coats' such as the example here. Failure to comply could be punished with imprisonment and if repeated transportation to a penal colony. However, Highland Dress was allowed to be worn by men as part of their uniform if they joined a Highland Regiment in the British army.

Research by Peter MacDonald, an independent tartan historian, has identified this coat as the one owned during the mid-late 1800s by the Scottish artists W B Johnson RSA (1804–68), then James Drummond (1816–77) and subsequently Gourlay Steell (1819–94). Steell lent the coat to The Naval & Military Exhibition at the Royal Scottish Academy Galleries, Edinburgh, in 1889, where it was described in the catalgoue as '2814 Highland Tartan Coat, worn by one of Prince Charles Edward's attendants at Culloden'. Steell later lent the coat to the tartan historian Donald William Stewart, who published a version of the sett as the Culloden tartan in Old and Rare Scottish Tartans, 1893. The tartan used for this coat was recorded by Peter Macdonald with the Scottish Tartans Authority, now the Scottish Register of Tartans, in 2007 as Culloden 1746 - Original.