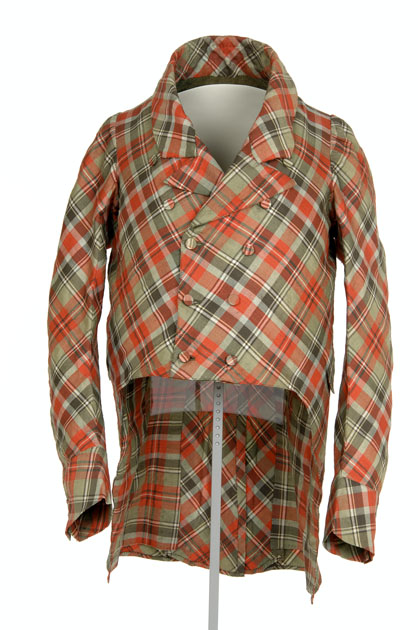 According to family tradition this tartan coat belonged to Prince Charles Edward Stuart (1720–88) and was left with their ancester when he is reputed to have stayed with them after the Battle of Culloden in 1746. However, when it was donated to Glasgow Museums in 1938 the donor was sceptical of this tale as her family came from Dundee and not the Highlands. The coat is made from what is known as Prince Charles Edward Stewart tartan, which according to the Scottish Register of Tartans is a version of the Royal Stewart tartan. Their registration notes state that it was recorded by Wilsons of Bannockburn (1792–1906) in 1819, who had been weaving it for several years.

However, the cut and style of the coat is of a later date. Surviving tartan coats from the 1740s, such as one also in Glasgow Museums collection (E.1990.59.1) have the tartan arranged so that the tartan pattern or sett is straight. However, tartan for this coat was cut diagonally on the bias. This has the advantage of providing some stretch to the fabric making the coat fit better and be more comfortable to wear. This use of a bias cut, together with the style that includes a double-breasted front and cut-away tails, dates this coat to the 1820s.

When King George IV (1762–1830) visited Edinburgh in August 1822 Sir Walter Scott (1771–1832) organized the celebrations and called for everyone to wear tartan. The Highland dress outfit worn by George IV was recorded in a portrait by David Wilkie (1785–1841) in 1829 (Royal Collection Trust, London RCIN 401206). Surviving examples of tartan outifts from his visit include those worn by William Blackhall and a piper's uniform worn by Malcolm McCallum, which are now in the National Museums Scotland, Edinburgh (A.1993.208 A-D and A.1915.212). This coat may have been worn during the king's visit or been inspired by the rise in the popularity of tartan arising from the royal occasion.