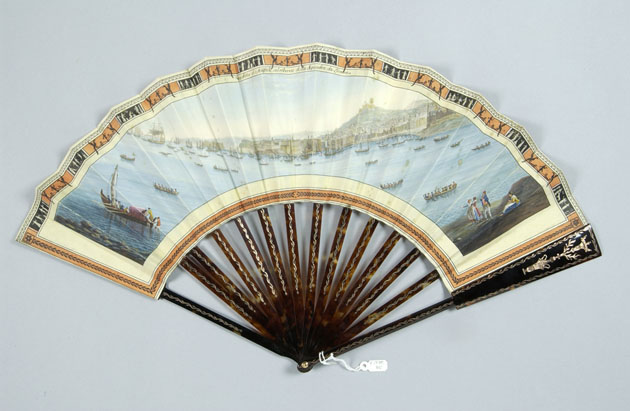 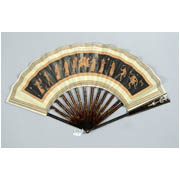 Fan with twelve tortoiseshell sticks and guards inlaid, clouté or posé with red gold foliage on sticks and foliage and urns on guards. Chicken skin leaf. Obverse painted with a scene depicting the bay of Naples with figures in the foreground, boats and ships in the harbour, and Naples with Mount Vesuvius behind in the background. Signed along left edge by Francesco Petilli. Surrounded by a border in terracotta orange, black and cream with Etruscan friezed motifs along the top and inscribed 'Veduta di Napoli, col ritorno della Squadria da Livorno' (View of Naples, with the return of the squadron from Livorno). Reverse painted in the style of Greek vases (incorrectly called Etruscan in the late 18th century) with Bacchus on a leopard in the centre surrounded by bacchantes and maenads in terracotta orange against black. Terracotta orange, black and cream border, inscribed ‘Figure estratte da un Vaso Etrusco’ (Figures taken from an Etruscan vase).

From about 1760 fans painted with scenes of the area around Naples became popular souvenir gifts from the Grand Tour. Several show Pompeii or the Bay of Naples and Mount Vesuvius, sometimes even erupting as there were several small eruptions in the 1770s and 1780s. Many are inscribed with several signed by the artist and dated.

The obverse leaf on this beautiful example was painted by Francesco Petilli. The reverse leaf is decorated in the style of Greek vases with Bacchus on a leopard in the centre surrounded by bacchantes and maenads. During the late 1700s these vases were mistakenly believed to have been made by the Etruscans, an ancient civilisation living in Italy. However, it is now known that these vases were exported from Greece.

Purchased at auction at Christie's, 1978