painting / Lady in a Fur Wrap 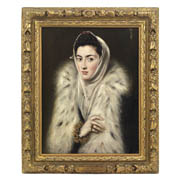 Lady in a Fur Wrap

This internationally-known painting shows a woman in close view. Her dark, curly hair sits atop her head, crowned by a small, red, jewelled detail. A white, sheer veil is secured underneath her pale chin. Around her shoulders is a length of brown and white animal fur, thought to be Eurasian or Iberian lynx.

Spanish 16th century royal or court portraits usually showed their sitters at a distance, with an air of formality. This painting, however, breaks that convention. Instead, we see the woman close up. This gives the painting a unique sense of intimacy and informality.

Before Sir William Stirling Maxwell purchased this painting in 1848, it hung in the French king Louis-Philippe's ‘Galerie Espagnole’ at the Louvre, Paris. At that time, it was thought to be the work of Doménikos Theotokópoulos (1541-1614), otherwise known as El Greco. In the mid-1800s, El Greco was not a well-known artist internationally. This painting helped to establish his reputation. The beautiful woman in fur became known across the world, and was even copied by the French painter Paul Cézanne.

The attribution to El Greco has been in doubt for decades, with many seeing differences in the master’s usual way of painting, which is typically far more loose and expressive. However, other artists suggested as possibilities seem just as unlikely.

Recent scientific analysis has now ruled out the possibility of the work being by El Greco. This analysis shows that the composition of the paint layers is distinctly different from works we know to be by El Greco. The artist that has emerged as the most likely to be behind the ‘Lady’ is Alonso Sánchez Coello, an esteemed painter who worked for the Spanish king Philip II, and was better known than El Greco in his day. One reason for this attribution is the similarity to another painting, ‘Joven Desconocida’ (Unknown Young Woman), in the collection of the Museo del Prado (accession number 1140). That painting, which shares a striking similarity in style to the ‘Lady’, has recently also been ascribed to Sánchez Coello. They both, furthermore, feature a similar woman in a close-up, informal pose.

Scientific analysis also revealed traces of under-drawing on the painting, which show a different design of garment underneath the fur. Instead of the striking fur cape, it seems that a previous design featured a geometric collar. Further points of interest as a result of the study show that the size was originally narrower than it is today, and that a red strip of paint lies hidden beneath the top layer of paint at the bottom of the artwork.

As for who the ‘Lady in the Fur Wrap’ is, the question remains. It is thought that at the time royal courts may have featured a gallery of paintings showing only idealised ‘beauties’: could the ‘Lady’ have been one of these? Could she have been a lady-in-waiting? Or someone close to the artist? This painting will continue to intrigue and fascinate for decades to come.