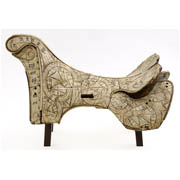 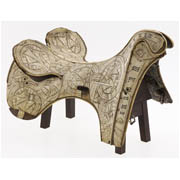 A Spanish standard bearer wrote of his master in the early-15th century:

"As for saddles, no man of his time understood them so well. He had them planed down and strengthened and at the same time had the wood made thin and the trimmings and straps less. It was in his household that the divided girth, such as they use today, was first used."

This wonderful saddle is a fine example of the saddler and saddletree-makers’ craft. It is made of delicately carved birch wood. Into this, plaques of bone have been inlaid. These have been beautifully decorated and further enhanced with green and red tinting. The decoration is the key to the identification of the place of origin. The rhapsody of scrollwork and gothic lettering point to one place: the central European kingdom of Bohemia. Many objects produced here in the late-14th and early-15th centuries have similar scrollwork and inscriptions. There are ceremonial arrowheads and well as a pair of spurs believed to have been made for Kasimir IV of Poland for his marriage to the daughter of the Bohemian king in 1454. The arrowheads have a repeated letter m inscribed on them whilst the spurs have pomny na mye ma myla wyerna pany. This is medieval Czech for ‘remember me, my dear and faithful lady!’ The letter m may also represent mamyla pan (‘my dear Virgin’) and mamyla panny (‘my dear Lady’) as appear on yet another arrowhead. The Mother of Jesus was often called upon to protect warriors on the European battlefield.