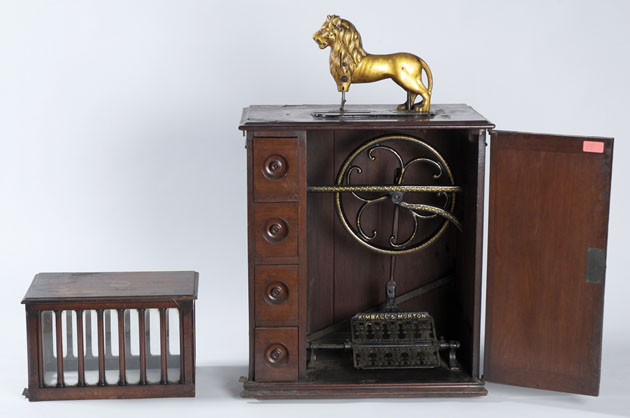 This is an example of a ‘Lion’ model sewing machine. It was in 1868 that the first ‘Lion’ model, a Registered Design, was introduced by Kimball & Morton. It uses a simple transverse shuttle lockstitch mechanism. The novelty is that the top section of the machine is modelled as a lion. The needle would originally have been hidden when not in use behind a pair of removable front legs. The original treadle design is of cast metal with a coat of arms between eagle and lion supporters with the motto 'Strength and Speed'.

On June 27th 1873 the ‘Lion’ was granted patent no. 2227. In 1876 It was exhibited at the American Centennial Exhibition, Philadelphia, where it was the only British-made machine to win a medal. Mechanically it is the same as a Singer 12.