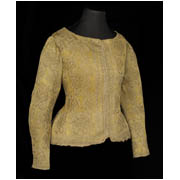 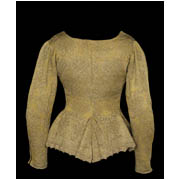 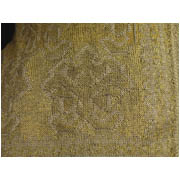 Woman's bodice or waistcoat knitted in stocking stitch for the main and garter stitch for the borders with beige two-ply silk thread (S twist with two component yarns with little twist) and gold foil spiral wrapped around a yellow silk core revealing part the yellow silk with stylised motifs. Fitted body with short flared skirt, formed by the tailoring not the knitting. Pointed edge to the border formed by stretching the knitting, rather than in the knitting itself. Open at front with no fastenings. Full-length sleeves gathered into the shoulder, knitted in the round to the elbow and tapered into the cuff with a seam, fastening with five buttons (now missing). Unlined.

Both men and women wore these items of clothing either as undergarments during the day or as informal déshabillé or undress at home in the evening to provide additional warmth. These items tend to fall into two categories: Italian waistcoats that open down the front, sometimes known as Florentine waistcoats, and those that pulled over the head. Italian waistcoats were knitted using one or two colours of silk yarn, in imitation of patterns found on woven silks, the effect often enhanced with the use of purl stitches. The fine gauge of these waistcoats suggests that they were hand-knitted in professional workshops, using extremely fine metal knitting needles, known as ‘wires’, for wealthy classes to buy as ready-to-wear clothing. The garment is constructed from rectangular knitted sections; two front panels, two back panels and two sleeves. Several have triangular gores inserted to provide additional width over the hips, at home by the wearer or a member of their household. Their name suggests that they were made in Italy and exported to northern Europe, but it is now known that fine silk yarns were imported from Naples to London from the late sixteenth century to supply the native knitting industry.

Because knitted waistcoats were for informal wear there are no known sources showing them being worn, making it hard to give them a more specific date. They appear to have originated at the beginning of the seventeenth century. Lady Howard ordered ‘a pound of woosted for wastecotes’ for 9 shillings in 1618 and the Danish Royal family used knitted silk waistcoats for children’s shrouds during this period. Knitted waistcoats continued to be worn throughout the century. There are records of waistcoats being relined during the course of their use. Sir Thomas Islam is billed £1 5s 6d from his tailor for ‘new Lining A Purple and gold Silke knit wastcoate’ in April 1680. There are continuing references to them also in the early eighteenth century, including a London newspaper report of the theft of a ‘green silk knit waistcoat with gold and silver flowers all over it’ in 1712.