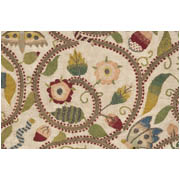 Woman's bodice or waistcoat in linen embroidered with light blue, cream, light green, pink red and yellow silk, silver and silver-gilt threads and spangles worked predominately in corded detached buttonhole and plaited braid stitch with satin and sword edging and woven wheel stitch in a rinceau pattern of repeated flowers, including roses, borage and blue bells, foliage, butterflies and caterpillars within curling stems outlined with small red stitches. Small, turned down collar at back, fitted bodice constructed with three panels, each side and centre back, fastening at centre front with twenty-one hooks and eyes, three of dark-grey metal may be original, the remainder in brass wire are later replacements. Full-length sleeves with epaulette caps at shoulders and turned back cuffs. Short flared skirts with V-shaped gored panels over hips outlined in gold. Lined throughout with linen.

Jackets, known as waistcoats, were commonly worn by men and women as informal garments during the 1500s and early 1600s. The most basic were made in linen, but some were interlined and quilted and the wealthy had waistcoats in silk, with the finest decorated with embroidery. The pattern of brightly coloured flowers, here with caterpillars and butterflies, set within coils of plaited braid stitch was very popular in the early 1600s. This specific design appears on a waistcoat on loan to the Fashion Museum, Bath. Variations of this rinceau design appear on other embroidered women's waistcoats and coifs of this period including one worn by Margaret Layton of Rawdon (1569–1662), the wife of a Yorkshire landowner, which is now in the Victoria and Albert Museum, London (T.228-1994).

Unlike some surviving waistcoats that are fastened with silk bows at the front this example is fastened with twenty-one hooks and eyes. The three at the waist made of a thick dark-grey metal wire, possibly steel, may be original. The remainder are later replacements made from brass, although still historic, added during the late seventeenth or eighteenth century. Brass and steel hooks and eyes survive on several items of clothing from the sixteenth and early seventeenth century. The tailors of Queen Elizabeh I (1533–1603) are recorded as ordering them by the pound. An early example of the use of hooks and eyes to fasten clothing is found in Jean Fouquet (c.1420–81), The Ferrara Court Jester, Gonella, about 1442 (Kunsthistorisches Museum, Vienna). The sitter is depicted wearing a patchwork doublet with the collar left unfastened and open to reveal two pairs of hooks and eyes of the same design as those available today.

Provenance: Frank Partridge & Sons, London; from whom purchased by Sir William Burrell on 15 October 1930 for £205.