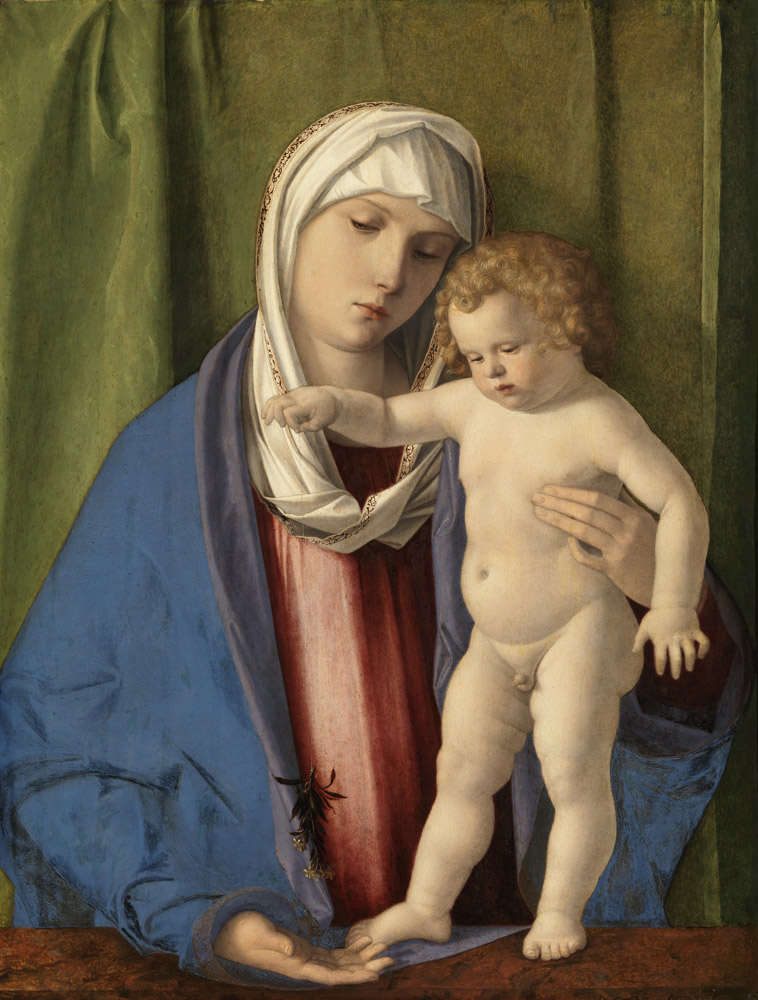 Virgin and Child; Madonna and Child

One of the many images of the Madonna and Child by the artist, this was painted by Giovanni Bellini around the year 1475, It shows the Virgin Mary gently supporting Jesus who is balanced on a marble balustrade running across the foreground of the picture. There are balustrades in many of Bellini’s paintings of the Madonna and Child, simultaneously inviting the viewer to worship while maintaining an element of distance. Jesus holds up his right hand in the traditional gesture of blessing, and both he and Mary look down calmly towards the viewer, thus giving the impression that he or she is being blessed by the Christ Child himself. The painting has been much overpainted and badly cleaned in the past, but nonetheless the serenity of the image against the dark background is still most effective and beautiful. It was thought that the plain background might cover a landscape scene, as fond in some similar works, but x-ray photographs show that there is nothing drawn or painted underneath the black layer.

Giovanni Bellini came from a dynasty of Venetian painters – his father Jacopo and his brother Gentile were both famous, as was his brother-in-law, Andrea Mantegna. He was one of the first Italian artists to make extensive use of oil paints, which gradually replaced the traditional medium of tempera (colour pigments mixed with egg). The rich colours of oil-based paints enabled artists to produce brilliant yet subtly-modelled works of art which appeared more natural that the rather stilted works, enriched with gold, of the previous era. Venetian artists like Bellini and his pupils were particularly noted for their imaginative use of colour.