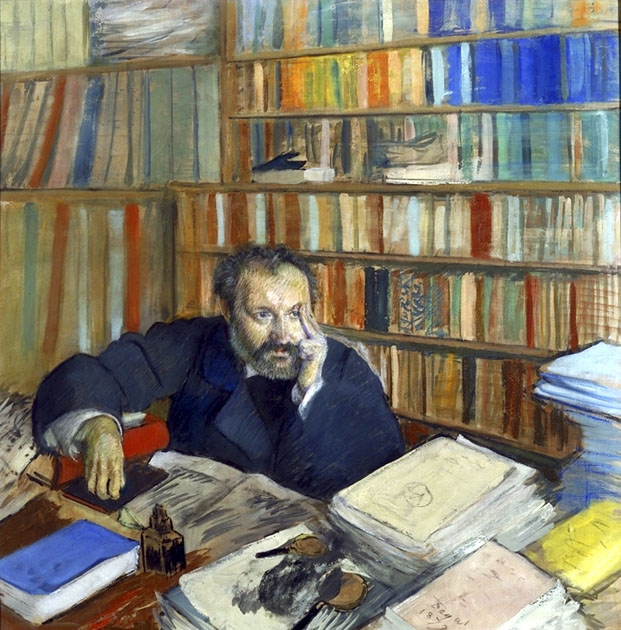 This work is licensed under a Creative Commons Attribution-NonCommercial 4.0 International License.
Permissions beyond the scope of this licence may be available at http://www.csgimages.org.uk. 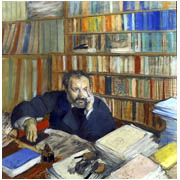 gouache with pastel enlivenment on linen

In this portrait Degas shows his friend, the art critic and novelist, Edmond Duranty seated in his study, literally surrounded by the books which were the tools of his trade. With the exception of the bottle of ink and the two magnifying glasses, the picture comprises nothing but Duranty and his books and pamphlets. As the first Keeper of The Burrell Collection wrote: ‘all that is not Duranty is books and all that is not books is Duranty!’

Duranty’s distinctive gesture – the fingers of his left hand pressed against his eye and forehead – could have been chosen by Degas to emphasise the intellectual nature of the man. It could have been a characteristic gesture of the sitter or it might simply have been chosen because it enabled Duranty to keep his head relatively still, during the long and arduous hours of posing necessary for the completion of the portrait.

Degas’s Portrait of Duranty was included in the Fifth Impressionist exhibition (1880) where it was reviewed by the Naturalist novelist and art critic, J.-K Huysmans: ‘M.Duranty is shown amidst his prints and books, seated at his writing-table, his slender, nervous fingers, his keen and mocking eye, his searching, piercing look, his expression as of an English comedian, and his dry little laugh into the stem of his pipe, pass before me again as I look on this canvas where the character of this curious analyst is so well rendered.’

Huysmans then noted Degas’s use of complementary colours - the forehead streaked with pink, the beard flecked with green and the yellow fingers outlined in bishop’s violet. He continued: ‘Near to, it consists of a hatching of colours which are hammered out and split up and appear to encroach one on the other; but at a few paces everything is in harmony and melts into the exact flesh-tone - flesh which palpitates and is alive, such as no-one in France until now has known how to paint.’

Edmond Duranty (1833-80) was a close friend of Degas. The two men probably met in 1865 at the Café Guerbois, where Manet was another regular. Already in 1856 Duranty had edited the short-lived periodical Le Réalisme, in which he defended Courbet and other Realist painters and writers. He also wrote reviews of the Salon and articles on a wide variety of art matters. Manet so strongly objected to one of Duranty’s reviews that he challenged the writer to a duel – fortunately both men survived.

Today, Duranty’s reputation rests on his essay The New Painting, published in 1876. In it Duranty discussed the evolution of a new stylistic approach to painting with subjects drawn from modern life but he deliberately avoided the use of the term Impressionism. Many of the ideas in the pamphlet were close to those shared by Degas and for a time some people even believed that it had been Degas, and not Duranty, who had written it. Degas’s portrait of Duranty perfectly sums up the guiding principles of the new painting as expounded in Duranty’s essay.

Duranty’s first and best-known novel Le Malheur d’Henriette Gérard, serialised in 1858, deals with the love of a young couple thwarted by a selfish mother. He published two more novels in 1862 and 1872. He wrote numerous short stories and 4 plays, none of which was staged during his lifetime. He also pioneered a marionette show in the Tuileries Gardens which ran for several years.

Duranty’s journalistic career included working for periodicals as diverse as Paris-Journal and the Gazette des Beaux-Arts. He wrote articles on topics ranging from politics and archaeology to literature and art. He had been commissioned to write a history of art in several volumes of which only one was completed at the time of his death, and he had published articles on Egyptian, Assyrian and Greek art. His more