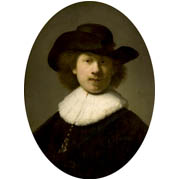 Rembrandt van Rijn was 26 years old when he created this self-portrait. Painted with a polish and refinement unseen in earlier self-portraits, his pale face is half-covered in the shadow of a wide-brimmed hat, and he wears a rich, black velvet cloak with gold buttons, capped by a fashionable white ruff. There is no indication of Rembrandt’s occupation as an artist in this portrait; we seem to be simply looking at a fashionable young man proudly displaying his wealth and status.

From the age of 22 up until just before his death at the age of 63, Rembrandt created over 70 self-portraits in both print and paint. This series presents a fascinating insight into an artist ever seeking to define his identity. In most of the portraits, Rembrandt presents himself in different costumes; with a sabre, wearing a turban, or in loose painting smocks. This self-portrait stands out as the only painting where he presents himself in formal, fashionable and contemporary dress.

Rembrandt may have painted himself in this way in order to fulfil a specific purpose. Leaving his native Leiden in 1631, the young artist moved to Amsterdam in search of new work. A prosperous city, portraiture was the most profitable line of business for artists at this time, and soon Rembrandt enjoyed a reputation as the finest portraitist in Amsterdam. Before moving to the city, however, he had not completed a single portrait commission, his training instead focusing on religious and historical paintings. This is one of the first paintings that the young artist created since leaving Leiden, and clearly shows the direction in which he sought to move. Rembrandt needed to demonstrate to the rich merchants and citizens of Amsterdam that he was able to paint fine portraits, and this painting would have served as an excellent example of the kind of portrait that he could offer. His early association with the local art dealer Hendrick van Uylenburgh (Uncle of his future wife, Saskia van Uylenburgh) already helped to establish connections with the elite business world. Creating a painting such as this would no doubt have helped to establish his artistic prowess amongst Uylenburgh’s circle, acting as a calling card for future business.

Painted underneath this portrait, x-ray tests reveal what may be another self-portrait. The figure, half-length and turning to the right, bears similarity to another self-portrait from 1633 (Paris, Musee du Louvre, no. 1744). Wooden panels were expensive to buy, and artists sometimes reused panels for new compositions. Perhaps Rembrandt painted the Burrell portrait because he wanted to update his image, reflecting his new status amongst the elite in Amsterdam.

When Sir William Burrell bought this painting in 1946, it was the most expensive item in his collection. He presented it to Glasgow the same year.