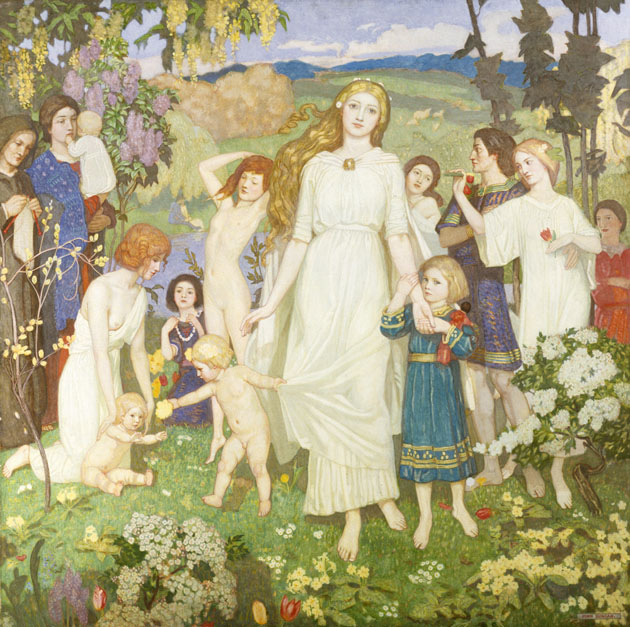 painting / The Coming of Bride

The Coming of Bride

Cecile Walton, writing to her husband Eric Robertson, described The Coming of Bride as Duncan’s ‘happy picture’. It is based on the Celtic legend of Angus and Bride. Bride was held captive by Beira, Queen of Winter. In order to find her, Beira’s son Angus, who was in love with Bride, casts a spell of calm on sea and land by borrowing three days from August. He finds her on 13 February which becomes ‘Bride’s Day’ and marks the first day of spring. The painting is full of spring flowers: primroses, azaleas, laburnum, lilac, tulips and grape hyacinth. Duncan specialised in scenes from Scottish history and Celtic legend. He was part of the Celtic Renascence movement which flourished in Edinburgh at the turn of the 20th century around the philosopher, biologist, town planner and social reformer Patrick Geddes (1854–1932).

Duncan wanted to paint pictures which were full of joy and life. He disliked Realist paintings that showed suffering and hardship. This painting was apparently inspired by a vision and was initially called Spring Song. It was begun in the autumn of 1916 and Duncan used a new method of combining egg yolk with pigments in emulation of the early Italian masters. ‘It has a fresco like surface that is delightful’, he declared. The flat and stylised background shows the influence of Paul Gauguin and the Post-Impressionists and the decorative mysticism of the Pre-Raphaelitists (Dante Gabriel Rossetti, Edward Burne-Jones) and European Symbolism (Puvis de Chavannes, Gustav Klimt).

The Coming of Bride, one of the largest of Duncan’s easel paintings, was exhibited at the Royal Scottish Academy in 1917.