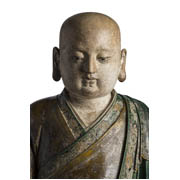 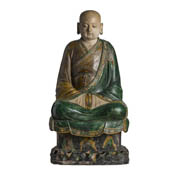 This almost life-size seated Buddhist Luohan (disciple of the Buddha) was made c.1484 during the Chenghua Reign (1465-1487) of the Ming Dynasty (1368-1644) at the imperial kilns in Shanxi province, Northern China. The Chenghua Emperor was a great connoisseur of porcelain and encouraged the development of polychrome ware and the revival of reign marks at a time when Buddhism was very popular in China. This Luohan is sitting in meditation (zazen) and is dressed in Indian robes (kasaya) draped over the left shoulder. A notable characteristic is the glaze used which closely resembles the three colour (sancai) glaze typical of earlier Tang ceramics (770-810 AD).The statue is raised on a stoneware base and has a rare inscription which indicates that it was made for the Wang family by craftsmen Liu Zhen in 1484. The commissioning of statuary became the vogue during the Chenghua reign as it signalled status as well as spiritual merit.

The Chinese word ‘Luohan’ derives from the Indian Sanskrit word ‘Arhat’ which refers to ‘one who is worthy’. According to tradition, the 16 Luohan’s were close personal disciples of Lord Buddha, who requested them to remain alive in this world to enable us to be mindful, develop wisdom and understanding until the advent of Maitreya, the future Buddha.