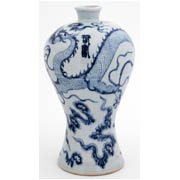 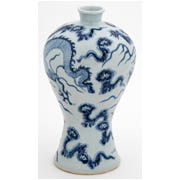 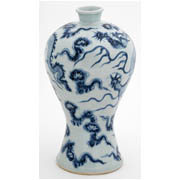 Vase, of porcelain, with pronounced waist and short everted neck. The form of this vase is referred to as Meiping (prunus blossom vase). The powerfully swelling shoulder slopes sharply down, then flares towards the bottom. Instead of a decorative band, the design depicts a five-clawed dragon over the upper part of the body, while magic fungus-shaped clouds encircle the lower part. The glaze quite is a marked sparkling blue colour and the cobalt used is full of manganese, giving it the characteristic gray-blue blotchy appearance. An unglazed concave base with convex centre shows a slightly discoloured white biscuit which has cracked open in places. On the shoulder of the vase are written two characters which have run in the firing process. They are in the seal script style and read Chun Shou 春壽 which has the meaning ‘spring longevity’.