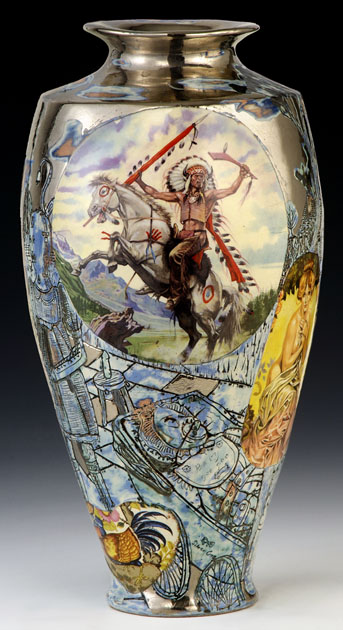 pot / Growing Up as a Boy
© Grayson Perry 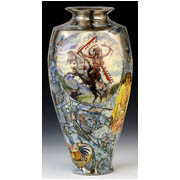 Growing Up as a Boy

When Growing Up as a Boy was acquired for Glasgow Museums in 2000 along with I Dunno and Mr Shitsex, Grayson Perry was known primarily for his ceramic pots and vases. His first ceramic exhibition was in London in 1983 and 20 years later he became the first ceramic artist to win the Turner Prize (2003) – awarded for the exhibition Guerrilla Tactics at the Stedelijk Museum, Amsterdam, curated by Marjan Boot.

One of the most interesting aspects of his work is the contrast between the topics or themes of his work and the use of an ancient medium like ceramics - made with traditional techniques such as coiling - to create a type of work that is also very conservative, such as vases and pots. Perry copies the form of different pots and vases from images in books, than then he decorates the vases using a variety of techniques, such as hand-painting and sgraffito drawings, photographic transfer and stencilled texts, and he also plays with gilding and different glazes. When asked why he chose that type of ceramics, he said that it was because: ‘It's the classic, [the] cliché form for ceramic. Right from its inception the vase was for display, wasn't really a functional ceramic, so I tend to concentrate on the vase because it's very traditional and an ancient form of sort of craft display (...) it hasn't that burden of function, like a teapot, or a tea cup (…) It is perfect for me because it slightly unsettles genres and boundaries...’

Perry encourages contradictions within his work: art-craft, kitsch-serious, angry-self-mocking, inoffensive-explicit. His observations of social detail, class, sexuality and conflict are sometimes personal, sometimes uncomfortable. He has used many techniques to layer imagery onto the coil-built clay pots which are part of Glasgow Museums’ collection. Coloured glazes, metal lustres and moulded clay are applied. Letters are impressed, drawings incised. The photolithographic prints are sometimes of Perry's own making, or sometimes mass-produced industrial transfers.

For Growing Up as a Boy, Perry's starting point was gender-defining stock-transfer imagery - fighter planes, Native Americans. These replay 'some of the emotional traumas of childhood'. Against this, the young girl Claire, Perry's transvestite self, begins to emerge.