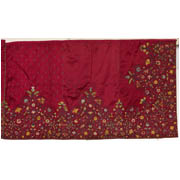 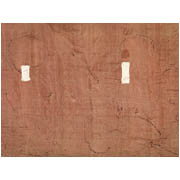 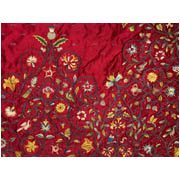 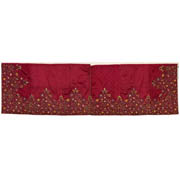 This red silk satin petticoat dates from about 1610 and is an extremely rare survivor from the early 17th century as large pieces of embroidery such as this were often reused. Fortunately this one was made into a panel, possibly an altar frontal, and therefore has changed little from its original form.

Historically, it was said to have been embroidered by Mary, Queen of Scots (1542-1587), when imprisoned in England as a gift for her cousin Elizabeth I of England (1533-1603). However, the style of the embroidery would appear to dispute this as it is from the early 17th century rather than the 1570s. The rich red colour of the silk is probably from cochineal, an expensive dye made from crushed cactus beetles imported from Mexico. It has been beautifully embroidered with a pattern of scrolling stems and flowers, including honeysuckle, pinks, lilies, roses and, most notably, thistles. There are also fruit, birds, butterflies and other insects. The skirt was given by Charles I (1600-1649) to one of his pages, William Levett. This suggests that it could have originally belonged to his mother, Anne of Denmark, wife of James VI, or perhaps one of the ladies of the court.

The skirt was purchased the Trustees of The Burrell Collection in 1996 with the assistance of The Art Fund (Scottish Fund).

Purchased by the Burrell Trustees with assistance from The Art Fund, 1996