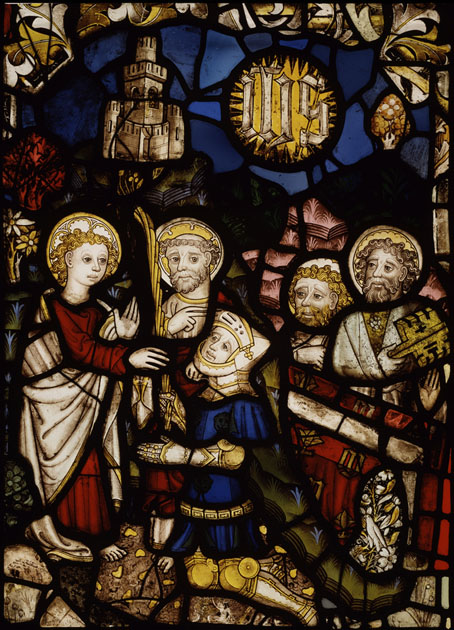 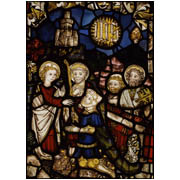 This rectangular panel depicts a conversion which took place during the funeral procession following the death of the Virgin Mary. A Jewish chief priest, represented here as a soldier wearing a blue surcoat ornamented with three green leopards' faces, over plate armour, kneels at the centre of the scene. He holds a palm branch, which has given him by St. John (standing clothed in a white mantle over a red tunic on the left). The Virgin's coffin covered with a red drape bearing the initial 'M' can be seen on the right; St. Peter with a large yellow key, and two other apostles can be seen behind.

The Golden Legend, not the Bible, retells the story of the Death, Funeral and Assumption of the Virgin Mary. It tells how a Jewish chief priest attempted to stop her funeral by turning over the bier. But on touching it his hands withered. The apostles told him that he would be cured if he acknowledged that Jesus Christ is the son of God and that Mary his mother. The Chief Priest subsequently stated this before the amassed crowd. The moment was marked by St John the Evangelist, who handed him a palm frond. This frond had originally been given to the Virgin Mary at the Annunciation, and she had passed it to John. The Chief Priest was to use this symbol to convert his own people. In the Golden Legend, St Peter tells the Priest to take the palm from John, an instruction visible here from Peter’s gesture. An antiquarian description of the window suggests that there was also once a scroll inscribed “ex credo in Jhesum”. The Burrell panel has lost its original background, and has three large medieval insertions.

The window is believed to have come from a window known as the Toppes window, after its donor Robert Toppes, in the church of St Peter Mancroft, Norwich. Toppes was a prominent Norwich citizen from the late 1420s until his death in 1467 or 1468. He asked to be buried in the Church’s chapel of St John the Baptist, in front of his window. Of the thirty lights in this window in the East Wall of the North chancel, fifteen lights are still extant.

It has recently been proposed that the panels telling the story of the Jewish Chief Priest’s attempt to stop the Virgin’s funeral and his subsequent conversion may be related to local political events. The leopards’ faces on the surcoat are thought to be a direct reference to William de la Pole, Duke of Suffolk, whose arms were azure a fess between three leopard’s faces two and one or.