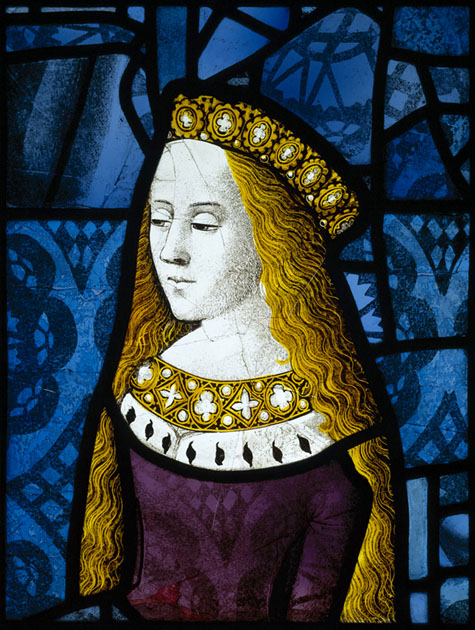 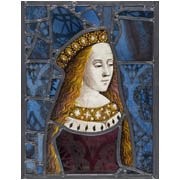 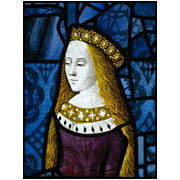 No other panel from the Burrell Collection has garnered as much attention as this three-quarter profile portrait of a princess with long golden hair, pearl-studded coronet and collar, and wine-red dress trimmed with ermine. The young woman it depicts has long been identified as Princess Cecily of York (1469-1507), daughter of Edward IV of England and Elizabeth Woodville. The panel once formed part of the Royal Window in the north-west transept of Canterbury Cathedral. There, Cecily was presented as one in a row of kneeling figures - alongside her mother, two brothers and four sisters. The window, which also showed St Thomas Becket was badly damaged in the 1640s and this particular panel was removed in 1789. An inscription relating to Cecily, not part of the window today, has been used to date the window. It refers to her as Edward’s second daughter. Cecily was in fact Edward’s second surviving daughter; her sister Mary died before her in May 1482. And the king himself died in April 1483, after which Elizabeth and her children lived in exile. This suggests a likely dating of 1483/4. Today, an impression of the original window can be formed from the modern restoration in Canterbury.

William Burrell acquired Cecily in 1939 from the dealers-restorers Roy Grosvenor Thomas and Wilfred Drake. Drake suggested to Burrell that he should look to present Cecily near to or with Beatrix of Valkenburg (45.2) as ‘a pair of English Royal portraits of different periods … each of them a fine example and full of romantic interest.’ Burrell had Drake work on Cecily. The blue background was cut down and used for 42.3, a Crucifixion, which now also sits atop a blue ground.

Before being sold to Burrell, however, the panel was apparently offered to Canterbury Cathedral. Previous owners were F. W. Bruce and R. L. Radford, who loaned the window to the Victoria and Albert Museum 1915-1919.