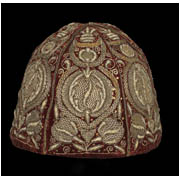 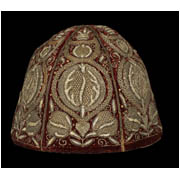 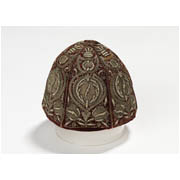 Man’s nightcap in red silk solid cut pile velvet, constructed from six conical sections, embroidered in silver threads, silver-gilt braid and gold spangles worked in basket weave, plaited braid with twisted couching depicting stylized fruit motifs, including pomegranates. Lined with linen, cut and shaped in the centre. Tag attached inscribed 'This cap belonged to Major Buntine, uncle of William Baillie of Monkton. He served under General Lesley in the Civil Wars; and particularly distinguished [sic] at Philiphaugh. Cromwell made him Master of the Horse in Scotland. Monk sent him to Breda to see Charles II.'

The pomegranate appeared as a motif on dress and textiles from the 1520s through to the late-1600s in Europe, but was particularly popular in England, not only due its use as the personal device of Catherine of Aragon and Mary I of England, but also as it was regarded as a symbol of fertility.

Purchased by the Burrell Trustees with assistance from The Art Fund, 2006