painting / A Funeral Service in the Highlands
Sir James Guthrie, A Highland Funeral, 1882 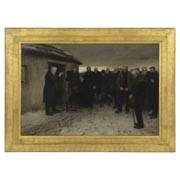 A Funeral Service in the Highlands

A snowy scene showing a group of men dressed in black, with heads sorrowfully bowed and hats respectfully removed, standing outside a crofter’s cottage. Before them, resting on two chairs, is a child’s coffin, covered in a velvet pall. A young boy with flushed cheeks stands closest to the coffin. Light falls on the minister, who has his hand uplifted in prayer or blessing. According to Highland custom, no women are present. Colours are muted, almost monochromatic. This painting was the first really ambitious painting to be produced by the Glasgow Boys, in terms of size and complexity of composition and grouping of figures.

In the summer to early winter of 1881 Guthrie, E. A. Walton, George Henry and Joseph Crawhall were sketching in Brig o’Turk in the Trossachs. At the end of their stay a young boy drowned in the river. Guthrie attended the simple funeral in the village, outside the boy’s home. It has a powerful effect on him. He made a few drawings and sketches on the spot, primarily of the minister. Interestingly Guthrie was the son of a Greenock minister and the figure may have struck a chord; he would have witnessed his father officiating at many such funerals.

A funeral was a serious subject for an aspiring young painter of modern life. Funerals were frequently depicted by Victorian artists as scenes of sentiment and pathos. However, Guthrie purposely avoided over-sentimentality, while keeping a sense of dignity and sympathy appropriate to the scene. He may have been aware of the French Realist painter Gustave Courbet, whose A Burial at Ornans (1849-50, Musée d'Orsay, Paris) was exhibited in Paris in 1881. However, Guthrie’s work is not political in intention. His work is closer in mood to that of the Hague School of painters, who painted scenes of the rural poor, using a sombre palette (apparently Guthrie had originally used brighter colours but Walton had advised him to tone them down). Guthrie particularly admired the work of Josef Israels. Interestingly A Funeral Service in the Highlands was first acquired by the Aberdeen collector John Forbes White, who was a major patron of Israels and the Hague School.

The painting was made in borrowed garden studio in Helensburgh belonging to the dentist and amateur artist John G. Whyte, an early supporter of the Boys. Guthrie used local characters as models. Whyte’s son Robert, age 8, modelled for the dead boy’s friend.

Guthrie also received early encouragement and informal instruction from John Pettie, a Scottish narrative painter, known for his historical and literary subjects and modern day genre scenes. His advice must have paid off. Here the young Guthrie skilfully conveys the substance of the sad story. The older men look broken with sorrow but the young boy, whose cheeks glow with life, looks slightly defiant in the face of death. The snow adds a bleakness to the scene, as does the heavy sky and low flying birds.

Despite being the largest work Guthrie had completed to date, it was painted very quickly and was ready to send to the Royal Academy in London by the end of March 1882, where it was sympathetically hung and well received by critics (no. 146). It was a considerable achievement for a 23 year old with no formal training. The painting was bequeathed to Glasgow Museums in 1903 by James Gardiner, a cousin of the artist. The Magazine of Art wrote in 1883: ‘In its earnestness and solemnity the picture, which is thoroughly national in sentiment and effect, rises to the rank of real religious art.’