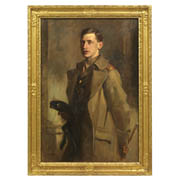 Lieutenant Arthur Leslie Hamilton (1893-1918) is shown in military uniform and great coat, standing three-quarter length, turned to the left, but with his head turned to look directly at the viewer. He holds his military cap in his right hand and cane in his left. Lieutenant Hamilton served with the 1st Highland Light Infantry in World War I. Tragically he was killed in action in Mesopotamia on the 25 October 1918. He was the son of James Whitelaw Hamilton (1860-1932), one of Glasgow Boys painters, who was particularly close friends with fellow Glasgow Boy James Guthrie. In this portrait Guthrie conveys a sense of dignity and pride in the strong posture and direct gaze of this young man in his military uniform. The background interior is indistinct and the colours are muted, showing the influence of the aesthetic portraits of American artist James McNeill Whistler, who was a mentor and inspiration for the Glasgow Boys group. Guthrie was to remain close to James Whitelaw Hamilton into the 1920s, the last decade of his life, when he lived very quietly in Rowmore, Rhu, and would meet up with his old friend in Helensburgh to smoke, talk art and reminisce. This painting was donated by the sister of the sitter, Mrs Hilda Whitelaw Purvis of Dunbeg, Helensburgh in 1956.