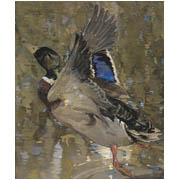 A Mallard Rising is an exceptional example of Crawhall's works on linen, showing the moment of immense physical effort when a male mallard takes flight from a river or pond, portrayed with great elegance and precision. He perfectly renders the iridescent sheen of the duck’s head, the glint in its eye, the stunning blues, purples and greens of its outstretched wings, the reflection of water on its russet breast feathers and the turn and curl of its outstretched feet, one still trailing in the water.

This precision is all the more remarkable as Crawhall painted from memory. A mnemonic method of working had been instilled in him from an early age by his father so that Crawhall developed an extraordinary ability to memorise detail and then capture on paper or linen the key defining characteristics of a bird or animal. As a result, his artworks are beautifully distilled, decorative achievements in which design considerations take as much priority as capturing a likeness. It is precisely this concern for the harmony of colour and arrangement of form that made his works so attractive to his contemporaries and to audiences today.

Born in Morpeth, Northumberland, Joseph Crawhall is associated with the Glasgow Boys painters because he worked and exhibited with them and share many of their influences and aesthetic concerns. However, unlike them, he painted largely in watercolour and focused on animals and birds rather than people. He particularly excelled in depicting birds in flight.

Encouraged by Glasgow dealer Alexander Reid, Glasgow shipowner Sir William Burrell (1861–1958) developed a passion for Crawhall’s work, buying as many works as he could. One of his key competitors was Paisley industrialist William Allan Coats (1853–1926), who bought A Mallard Rising by 1912. It was first lent to the International Society of Sculptors, Painters and Gravers in London in 1909 (no. 9), the year after it was painted. It was then shown at the Rome International Fine Arts Exhibition in 1911. In 1912 it was included in William Bell Paterson’s Loan Collection of Watercolour Drawings by Joseph Crawhall in Bond Street, London (no. 638), lent by W. A. Coats.

A Mallard Rising descended to Coats’ son, Major John A. Coats of Dundonald (1892–1935). It was the most prized and sought-after artwork in the sale of his collection at Christie's in April 1935, reaching 1,150 guineas (lot 7), the highest of any of the Crawhalls at the auction. In contrast Pheasant (lot 10) sold for only 380 guineas. The Daily Telegraph reported that Crawhall's 'remarkably graphic drawings evoked the most enthusiastic bouts of bidding, culminating in one of 1,150 g[ui]n[ea]s for the subject of a mallard rising from the water [...] A band of Scottish dealers fought for the Crawhall drawings.’ Burrell bought eleven Crawhalls from this sale and would have been disappointed to have missed out on the purchase of A Mallard Rising. However, thanks to the Burrell Trustees, the painting has been added to the Burrell Collection in 2022, a fitting acquisition in the year that Glasgow celebrates the collection’s reopening to the public after a major refurbishment.

Purchased by the Trustees of Sir William Burrell’s Trust, 2022