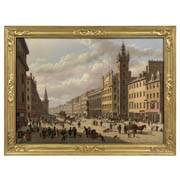 Old Glasgow Cross or The Trongate

This view, painted in 1826, shows Glasgow’s grandest city centre street shortly before the effects of the industrial revolution. Glasgow Cross is the location where the four main streets of the medieval city meet, and the principal feature is the old Tolbooth (prison) tower. Running westwards from here is Trongate, with the Tolbooth followed by the arcaded Tontine Building, where the city’s merchants were privileged to meet. The statue of King William III on horseback was placed here in 1735 (moved to Cathedral Square in the 1920s); farther away on the left is the Tron Church steeple.

This is acknowledged as the most important painting by John Knox, the pioneering Glasgow landscape painter of the early 19th century. As well as a topographical record of the architecture, he paints a significant document of social history and street life, much of which repays further investigation. Many trades are present, and some individuals can be identified.