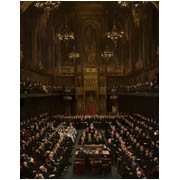 This picture records the debate in the House of Lords of the Articles of Agreement between Ireland and Great Britain on 15 December 1921 whereby Ireland was given dominion status but any of the 32 counties were permitted to secede from the ‘Free State’. As expected, six of the Ulster counties opted to remain as part of Great Britain.

The Lord Chancellor, the Earl of Birkenhead, sits on the Woolsack in the centre in his gown and wig. It was he, along with Sir Patrick Ford, who suggested that Lavery should record the event, the first artist ever to receive a commission to paint in the House of Lords. Sitting in the Press Gallery, Lavery was able to recreate the magnificent setting with the Commoners and Peeresses in their galleries looking down on the Peers below. At the far end of the room are the royal thrones. In front of them stand members of the House of Commons (including Lloyd George) who have come to listen to the debate. Earl Morley stands at the lower right proposing the Treaty.

Lavery made an oil sketch on the day which he later worked up into the finished painting, aided by detailed portrait studies. In 1922 the painting was exhibited at the Royal Academy (125) and then at the Royal Glasgow Institute for the Fine Arts (116), from where the Corporation of Glasgow bought the work.